Effective Key Generation For Multimedia Java Project entitled Effective key Generation for Multimedia Application is the application developed to embed an video file in another video signal. It is concerned with embedding information in an innocuous cover Speech in a secure and robust manner. This system makes the Files more secure by using the concepts Steganography and Cryptography.

Stenography, poor cousin of Cryptography is the art of hiding messages inside other messages such that the very existence of the message is unknown to third party. The goal of cryptography is to make data unreadable by a third party, the goal of Steganography is to hide the data from a third party Through the use of advanced computer software, authors of images and software can place a hidden trademark in their product, allowing them to keep a check on piracy.

This is commonly known as watermarking. Hiding serial numbers or a set of characters that distinguishes an object from a similar object is known as finger printing. Together, these two are intended to fight piracy. The latter is used to detect copyright violators and the former is used to prosecute them. But these are only examples of the much wider field of Stenography.
The cover data should not be significantly degraded by the embedded data, and the embedded data should be as imperceptible as possible. The embedded data should be as immune as possible to modifications from intelligent attacks or anticipated manipulations. Thus it is necessary that the hidden message should be encrypted. 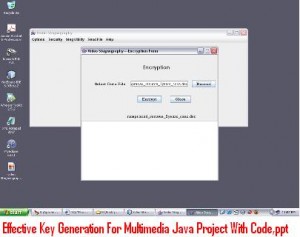 GUI Module basically deals with the design of the interface which include the service of providing the user with the flexibility of accessing the file system and selecting the required file for the transfer.

It should also provide the system to collect the information from the user to check the authorization in providing the access to the file system. The interface is also to consider the design, which include the services of sending and receiving of the files with encryption and decryption standards.