This agriculture robot project aims at designing a live Robot which is capable of seed sowing and performing operations like ploughing, seed dispensing and pesticide spraying.

In present days we have many machines which are capable of seed sowing but they are hand operated machines, so we are designing a robot which will drill the soil and sow the seeds this robot has two modes of operations like auto mode and manual mode, in auto mode it moves in a particular grid by help of sensors.

This robot is capable of receiving few sets of command instructions in the form of Bluetooth tones with help of android app and performs the necessary actions. Bluetooth module receives the commands we have an android app which will give signals to Bluetooth at robot for controlling the motion of the robot.

This agriculture robot has two modes one is auto mode another is a manual mode in manual this set with help of switch button in manual it works with Bluetooth (HC -05) signals, in auto mode it works with Help of IR sensor in front of the robot for making a grid pattern seed sowing,

In this agriculture robot project we are using Arduino UNO as motherboard which will control the robot driving motors and seed dispenser servo .entire project runs on 12V lead-acid battery. 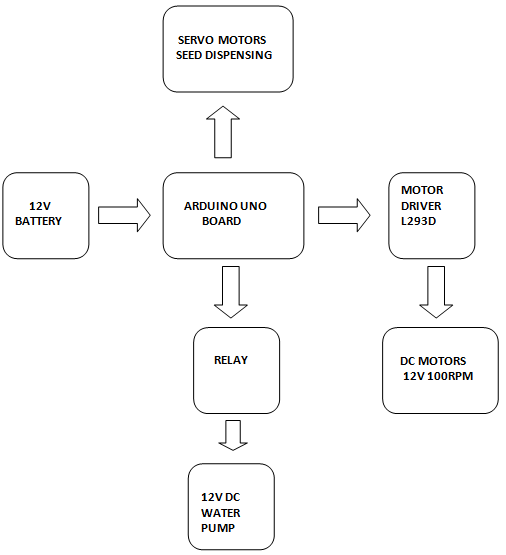