Steganography a .Net Project is the process of hiding messages in a way that only the intended recipient is aware of that message. The project is titled “Steganography” and explains the technique in detail. The messages are first encrypted by traditional means; the converted text is modified again resulting in stegotext. This technique is used in electronic communication as in MP3 file or protocol. 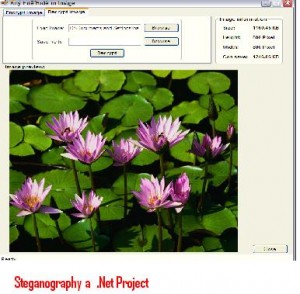 Important files possessing confidential data are stored in server in encrypted form and access is limited only to authorized people only. While in transit too, the message is in encrypted form to prevent access by others. Modern cryptography techniques have several algorithms for encryption and decryption. They are coded on bases of keys which are used in the encryption algorithm.

In this project “Steganography” less important information in the digital data is replaces by hidden data. This process is implemented over the spectrum of the entire range. In the image considered here, a sequence of 24 bits represent a single pixel. Thus 3 bytes of color info give 256 color combinations for each color thus allowing representation of 16.7 million colors.

Here around 11 pixels represent a part of a solid-color background. Thus in the sequence generated the least significant bit of each 8-bit byte is replaced to hide a text message by ASCII binary. The hidden message replaces 32 of the 264 bytes constituting 12% and is in four 8-bit bytes. By this technique the hidden message is transmitted.
Conclusion:

This project is very useful in the field of communication where information transmission is an important component. Thus this method is efficient in transmitting confidential information. Thus, the project designed here is 100% free and is ready for implementation. In the future enhancements such as investigating the feasibility of embedding programs in firewalls to act as a first line of defense against stenographic data transmission.