Development of Bus tracking Android application which will do these things:

1) This real-time bus tracking system with functionalities like ETA, bus recommendation.
2) The user should be able to see the real-time bus movement and if he taps on the bus in the map.
3) The bus should show it’s route and destination. The person who is on the bus should have a different app in which he will input the source destination.
4) And the user app will be a different app.
5)That person on the bus will be the driver and he will enter the bus number through his smartphone and will be using the bus app not that user app.
6)After entering the bus number the bus now will be shown on the map which will be seen by the user by using a user app.
7)Yes, we need settings options for driver end side like on and off for tracking and update bus details.

This android project includes four main modules or features below

1. Get the user’s current location and notify him his nearby local bus stops and their names and distance and time to get to the bus stop.
2. Get the source and destination points from the user and mention him all the local bus numbers through the route and the route map as well.
3. He can be able to check his nearby places as well like, hospitals, police stations, malls, atm etc.
4. He can share his location with anyone through social media. 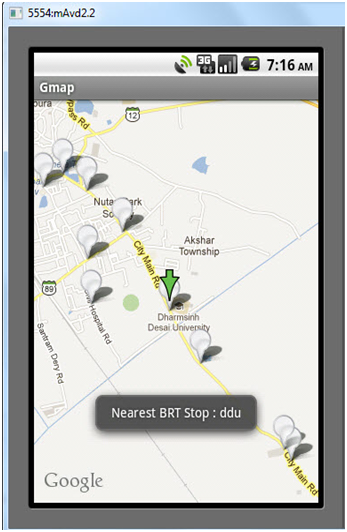