Google chrome OS  seminar explains about a web browser used to access internet. It is developed by the Google in September 2008 but it was released in December 2008. It was first developed for only windows that are the beta version. After one year it become third most used web browsers.

Google Beta version that was released for the windows have many features like shortcuts, tabs, cache control, one box suggestion that suggest for both web pages and search. It also used start page that look like opera browser. Additional feature was safe browsing that warns about any harmful website of page phishing. Google chrome os power point presentation will give over view on this topic. 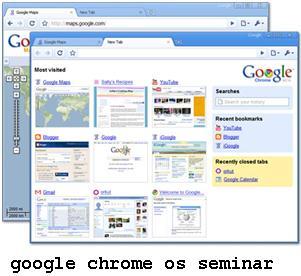 If you drag your tab down then it will open new window. Below the address it putted the star button that shows that you can bookmark any site with just one click. It has inbuilt downloader, it show downloading file below the windows.

Use first time: double click the Google chrome icon, it will open a window and a dialog box appears asking whether you want to set it a default web browser click yes if you want. Then it will automatically import all the setting from internet explorer and save it as default. Then you can start surfing by writing your site on the address bar.