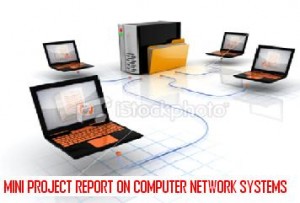 A Computer Network mini project allows sharing of resources and information among interconnected devices. A network is a set of devices connected by media links. The links connecting the devices are often called communication channels.

For effective and efficient network, it must meet the important features like performance, reliability and security. The main purpose of networking is resource sharing and communication. The advantages of this computer networking are Easy Backup, Low cost  and  Security.Network model tells us how the computer can be inter-connected .The two best known standards are the OSI model and the internet model.

There are the two types of connections in the computer networks-:

The hardware required by the networking group is Transmission technology and Scale. According to scale the network are divided into three categories:-

Network topology is the layout pattern of interconnections of the various elements (links, nodes etc.) of a computer network. They are classified into three types. Physical Topology, Logical Topology and Signal Topology.

In a Network system connecting different computers and different network components with each other using a wired or wireless systems method is called as network switching system. There are three types of switching networks they are circuit switching, message switching and packet switching. Computer networking provides several important services, both to organization and individual used. These services can be provided in two ways:-connection oriented and connection less oriented.