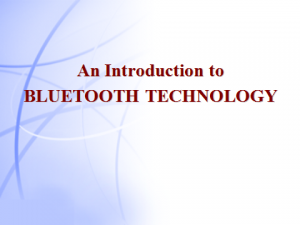 This Bluetooth Technology ppt presentation is about the Bluetooth technology. There are two types of radio components when we are dealing with the sensor nodes: the nodes which are based on fixed frequency carriers

And there are nodes which are even based on the spectrum transmissions like Bluetooth. I.e. the node within the range makes use of channels for transmission of the data.

The experiment results says that the sensor networks which are Bluetooth based are good for the applications where there is a heavy data exchange between the devices over a period of the time.

Bluetooth is considered as the best device for communications because of the following features i.e. interoperability can either exhibit between the devices or can be between the manufacturers. The implementation of the Bluetooth is easy i.e. it is self operatable without a need of the user’s guide. It is comparatively less or similar to that of cost of the cable it is getting replaced. It is capable of performing its task at lower power consumption.

The key aspect for the implementation of the Tiny Bluetooth stack, as for any TinyOS program, is memory management. It must be simple in order to minimize code footprint and also optimize the data footprint. We depend on buffers usage across components. We design a buffer structure such that it is used throughout the Bluetooth system. The structure general packet is inspired by Linux buffers.

We can conclude that Bluetooth plays a vital role in the wireless communication technology with the its features discussed.