Data mining in education institutions is helping to analyze students’ details and provide an effective evaluation system in a short time. With the advancement of new technologies student’s evaluation procedure has changed from manual correction to automate process of correction and analysis. This student coding assignment evaluation system using API is designed to evaluate students coding correction process through the automation process. When a student submits an answer for a student’s question online faculty will evaluate coding by sending data to API and get results or error messages. By checking these messages faculty will give marks to students. This process is done through a web application that is developed in python programming language.

Students assignment evaluation is a time taking process for faculty which required a manual process by checking each line of code and give marks to students.

The coding evaluation process can be automated by using available code checking API’s which can be integrated into the college assignment assigning website. Using this process evaluation is completed just in a click and faculty can give marks based on result.

The student online coding evaluation system provides an automatic coding checking process through which faculty can assign coding assignments and get results from students and compile code in click and check result and give marks.

Cyber bullying is the process of sending wrong messages to a person or community which causes heated debate with users. Cyberbullying is mostly seen in social networking sites where users reply to post with bullying words to threaten or insult other users. Cyberbullying is considered a misuse of technology. According to the latest survey done on all over the world data day by day, cases are increasing on cyberbullying. In order to solve this problem many natural language processing techniques are proposed by various authors which are time taking and not automatic. With the advancement of machine learning and artificial intelligence, models can be created and automatic detection can be implemented. To show this scenario live chat application is developed in python programming with multiple clients and one server and the Naive Bayes algorithm is used to train the model on a Twitter dataset and using this model live detection of cyberbullying is predicted and alert messages are shown on the chat application.

Social networking and online chatting application provide a platform for any user to share knowledge and talent but few users take this platform to threaten users with cyberbullying attacks which cause issues in using these platforms.

To provide a better platform for users to share knowledge on social networking sites there is a need for an effective detection system that can automate the process of cyberbullying detections and take decisions.

Techniques which are used in the existing system are not automated they need time to process request and update response.

Cyberbullying detection is designed using machine learning techniques. Twitter data set is collected with features and labels and mode is trained using the Naive Bayes algorithm and trained model is applied to live chatting application which has multiple clients and a single server. For each message, cyberbullying is detecting using the model and then alert messages are posted on chat boards.

Cyberbullying detection process is automatic and time taken for detection is less and it works on the live environment.

The latest machine learning models are used for training models that are accurate.

Analyzing and prediction of academic performance is important for any education institutions. Predicting student performance can help teachers to take steps in developing strategy for improving performance at early stages. With the advancement of machine learning supervised and unsupervised techniques developing these kinds of applications are helping teachers to analyze students in better way compare to existing methods. In this student marks prediction using Linear regression project students’ academic performance is prediction considering input as previous students marks and predict next subject marks and accuracy of the model is calculated.

Analyzing and prediction of marks for students was done based on guess and students’ personal marks details are not considered for academic evaluation.

Corona virus ( COVID-19 ) is creating panic all over the world with fast growing cases. There are various datasets available which provides information of world-wide effected information. Covid has affected all counties with large number of cases with variation of numbers under death, survived, effected. In this project we are using data set which has county wise details of cases with various combined features and labels. Covid data analysis and case prediction project provide solution for data analysis of various counties on various time and data factors and creating model for survival and death cases and prediction cases in future. Machine learning provides deep learning methods like Convolution neural network which is used for model creation and prediction for next few months are done using this project.

By collecting data from Kaggle and new York dataset data preprocessing is performed and data analysis is performed on dataset and machine learning model is generated for future prediction of cases.

Using data set pre-processing is performed on the collected data set and various steps for deep learning model is performed and prediction of cases is done then data analysis is done on various factors.

Data security in cloud computing is a mostly researched topic which has various solutions like applying encryption to data and using multi cloud environment. But still there are many issues related to data security. In this project we are using ECC digital signature method to sign signature of user data while uploading to cloud and use same digital signature to download when required.

The Elliptic Curve Cryptography (ECC) is modern family of public-key cryptosystems, you can use an Elliptic Curve algorithm for public/private key cryptography. To be able to use ECC; cryptographic signatures, hash functions and others that help secure the messages or files are to be studied at a deeper level.

It implements all major capabilities of the asymmetric cryptosystems: Encryption, Signatures and Key Exchange The main advantage is that keys are a lot smaller. With RSA you need key servers to distribute public keys. With Elliptic Curves, you can provide your own public key.

In python, the above described method can be implemented using the   ECDSA Algorithm. 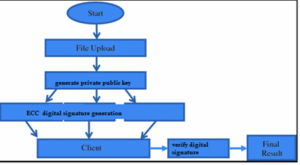