Wearable computer seminar explains about a technology that can be fitted into the human’s heel and can be charge through mechanical movement of the body.There is technology in which the human can walk by just wearing the laptop cell phone and pager. There is lot of development in wearable computing technology now days this have changed the world too much by developing the hardware, software and the communication between two technologies. 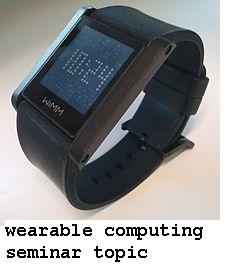 Through this development in technology the computing devices has becoming smaller and smaller day by day just like a hat or jacket. This technology is fully sensors mounted and will keep the track of the activity that we are doing and allow the computer to take active participation in the work that we are doing.

Wearable technology came into world in 1979’s us was full of many drawbacks like not light weight and not has a very fast processor. After this many development was done in this technology to make it very useful and finally in 1980 a wearable computer was developed that has eyeglass over the multimedia device and furthermore many advanced has been done in this technology.

NOMAD: – It is type of nomadic radio that has the ability to provide audio interference and act as a messaging system. This can be used to download many e-mails, voice mails, remainders etc. this works by buffering the audio and visual data. The system starts its recording only when the user instructs it to do so and stops only when the user gives it instruction. The user used the video camera to take the visual of the clip and this can be done by detecting the camera towards the object and the images of the objects can be identified by taking the histograms of the objects. At present the data transmission is done by wireless media.