The previous chapter describes the design of the simulation and this chapter concentrates on the explanation of the corresponding simulation process that is implemented in the project. The explanation of the process that is followed to create the scenarios that are required for the simulation is done step by step in this chapter in addition with the other procedures like network configuration, configuration of nodes, configuration of wireless LAN server, setting profile config, application config, mobile config and setting the DES metrics. All these explanations are done to provide a better understanding about the simulation procedure for achieving the aim of project, the respective screen shots are also appended in the sections below. As discussed earlier the simulation of this particular application considers two scenarios and the process involved in creating both the scenarios and the process involved in simulating the scenarios in order to obtain the results is explained clearly in the further sections of this project.

The basic network selected for the simulation of this project is “Mobile Adhoc Network and this section explain the process that is implemented to create a network and to make the basic settings for the network as required. Based on the requirement of the user a new scenario is deployed and renamed as the initial step of the simulation procedure. The steps involved in creating the scenario and the screenshots that explain the process involved is shown below: 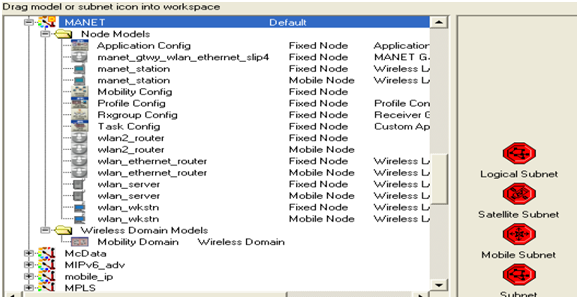 There will be different kinds of nodes provided by the object palette shown above and these nodes ate selected for simulating process through the MANETs and the nodes selected are the process involved in the creation of the network is given below:

All these nodes listed above are dragged from the object palette and placed on the working station and the process of placing these nodes is very easy and very helpful in the creation of the network needed. The setup required for the basic network required for this particular scenario is represented in the screenshot given below and this contains all the required nodes listed above. 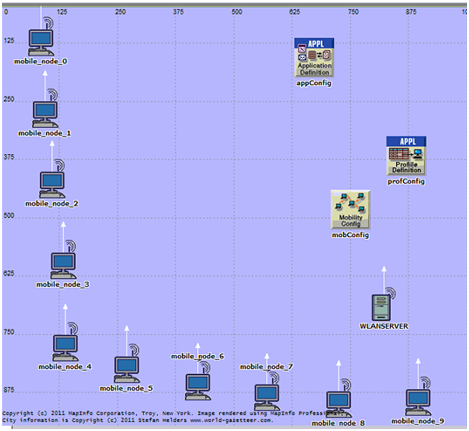 The following screen shot will represent the actual process of setting the application configuration. 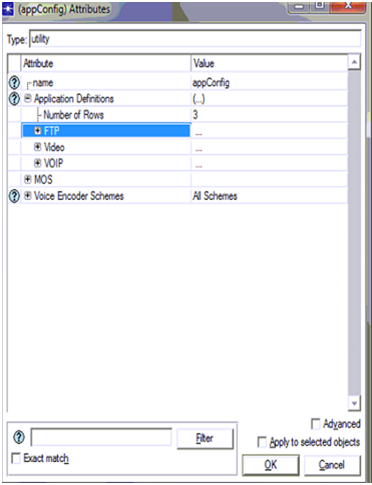 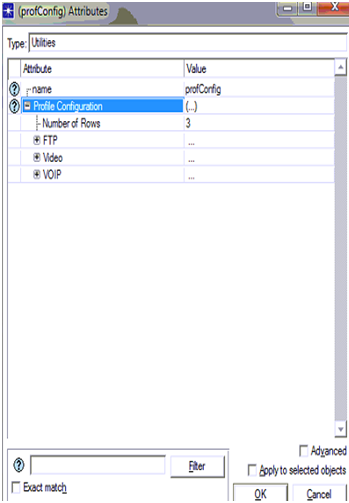 All this process is represented using a screen shot given below: 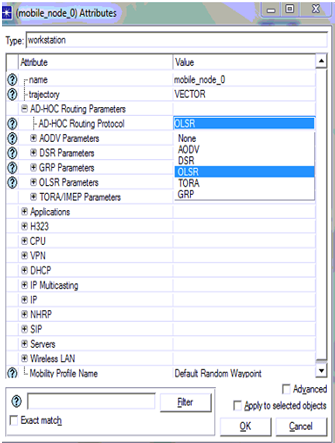 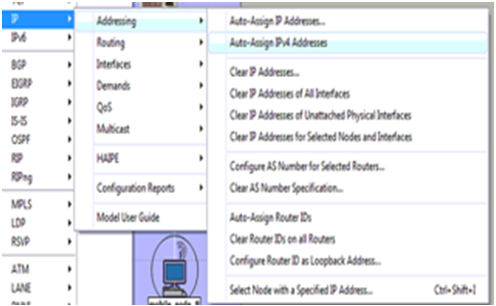 The requirements needed at the work space are selected earlier they include mobile nodes and wireless LAN server and this can be observed once the application menu is unleashed .from the above screen we can make certain implementations such as we can open IP protocol menu the next step is to navigate into addressing option and the concerned address is allocated. We may also conclude that from the given screen shot that Auto assign IPv4 addresses option is chosen to allocate the necessary IP’s to all the mobility nodes and LAN server and from here the original settings for application purposes are applied for all the nodes that we come across and the server including the process applied is given in below scenario

By making sure that entire network is ready for simulation purpose in the 10 mobile nodes and for this a wireless LAN server is required and it is configured for back up in the corresponding application and remaining profile configurations are common as discussed earlier.Here also two methods are there and both of them are given from step to step basis 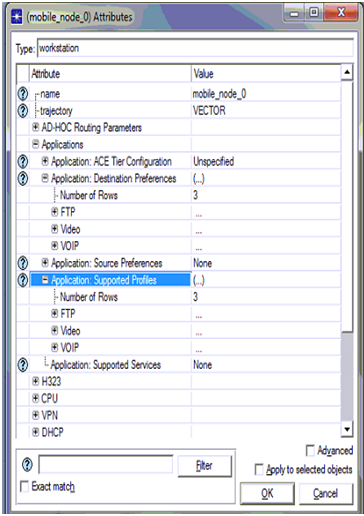 From the above screen shot it is decided that the application destination preference tab is opened to fix the necessary application and the number of rows is fixed as 3 since three applications are developed for simulation process. Once the application is choose the required servers opted are FTP server, Video server, Voice sever as mentioned in the above screen shot once these settings are completed the actual application supported profiles choice is used to back up the ftp,voice,video profile is developed in the particular configuration time  .as we decided to take 3 rows and ftp,voice,video is choose based on the profile configurations shown in the previous screen and these settings implicated to the opted objects  and this can be viewed in screen shots given  below once the mobile nodes are confirmed to back up the concerned application and its profile now the wireless LAN server is also fixed accordingly and this clearly described in the form of steps 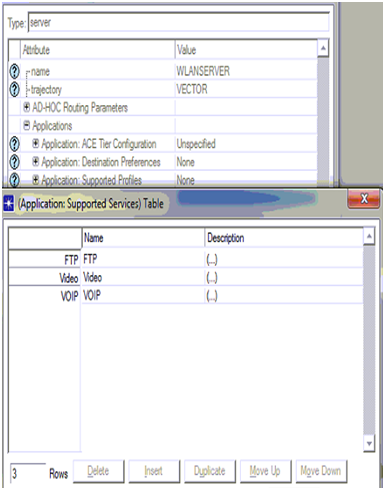 The assumptions can be made from the above screen that three rows can be created and simultaneously three server levels are chosen they are FTP, VOICE, VIDEO servers the necessary profiles to be backed are depends upon its description is fixed as viewed in above screen .Now go for OK button for continuously two times to imply these configurations to the wireless LAN server .As per the studies before  the next process to modify these characteristics to help the deployment to be easy for application and the concern steps e valuate this process 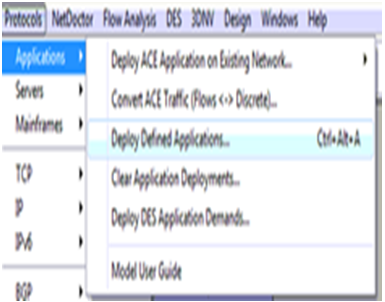 Protocols index is elaborated and from now the application selection is opened to do deliver the  operations as shown in the up screen .from this image it is guaranteed that the installations applications option is opted for deploy to be done in the network and the next ultimate screen is seen to the users 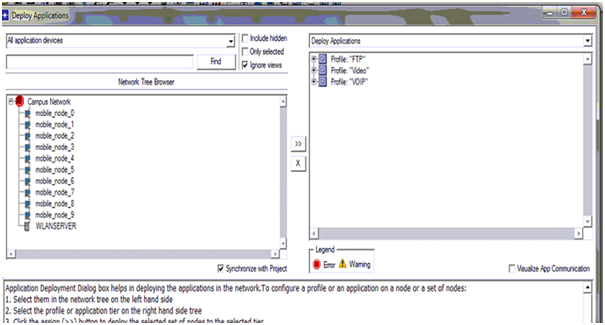 The definite exploitation process is given in the above screen and from this screen it can be noticed that all the mobility nodes are lagged towards the supply and the wireless LAN server is lagged around the terminal. The reliability of the installation process can also be verified with the button process reliability as given in below and from here the nodes and three servers to back the applications and the  profiles developed across the simulation fixing the mobility to each and every  nodes is the last place of the total settings and the equivalent process is shown

The necessary requirements for developing mobility nodes is all fixed in the mobile nodes  and this can be clearly viewed in the screen shots in the above section this is done by taking the mobile configuration settings. Mobile nodes can be described at this case and this corresponding process applied is also seen below. 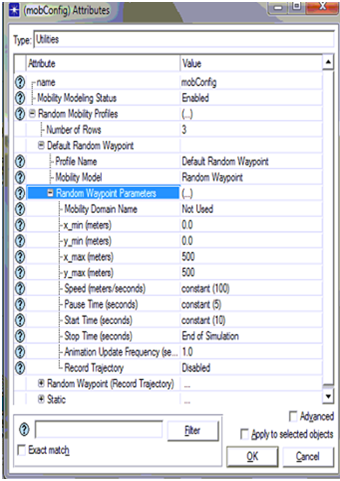 As we all can get idea after seeing the screen shot of choosing the mobility node in three different ways one among them is default random waypoint is selected and the required parameters are given in that particular scenario.Random waypoint parameters are fixed into the velocity of the mobile nodes is taken as 100 m/sec. And the pause time is fixed as 0 as shown in the fixed screen and from the screen it can be noticed that start time is defined to be a constant value of steady 10 seconds and the end time is till the conclusion of simulation. Once all these configurations are happened these are simultaneously applicable to all the mobile stuff and the genuine process segt here is given in the scenario below. 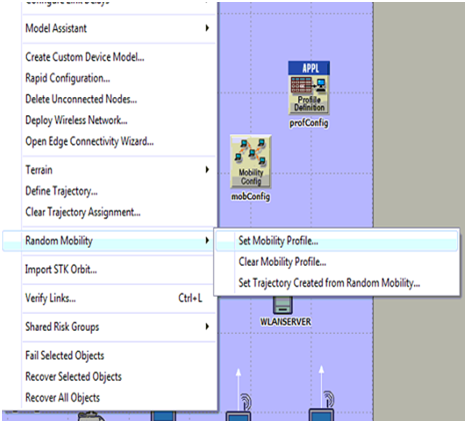 From the screen we viewed it can be noticed that set mobility profile is utilized to fix the required mobile configurations to all the nodes on the system consisting network and this is surfed by the utilization of random mobility option and the original mobile settings is to fix all th configurations on the same network .Now the final lap in the simulation of this context is to fix the individual DES statistics and this procedure is given below. 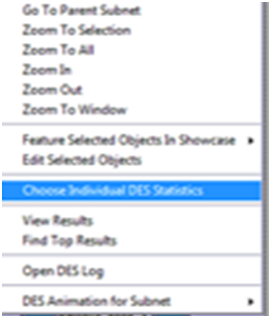 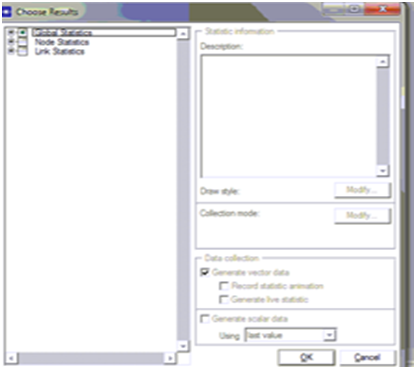 Hence by seeing the screen we can derive that there are three levels of metric performances and among the three global statistics are utilized in simulation process and the equivalent metrics is shown below. 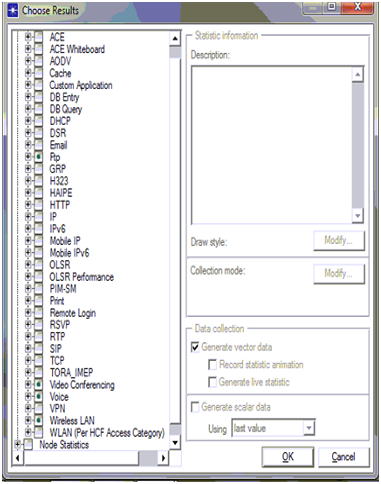 Following are the performance metrics used for FTP application

Following are the performance metrics for Voice application

Following are the performance metrics used for video application

Following are the WLAN metrics used

This simulation model is similar to the first one which comes with some necessary changes  and the only change in this process is choosing of LAN parameters in the scenario remaining is the exact replica of the first one   and the screen shots give anew idea of this process. Once the necessary system is replicated the necessary configurations are also varied for all the mobility nodal and the wireless LANS server screen shots are given below. 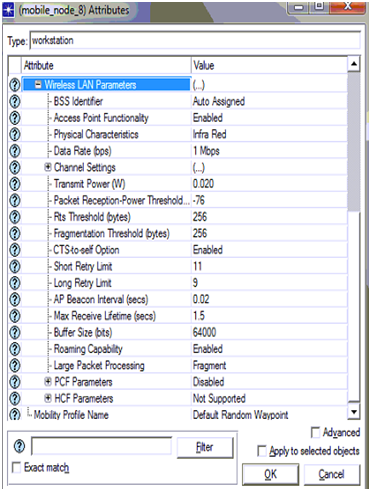 Once both the scenarios are ready to work then the simulation is processed for 5 minutes to acquire the results and the corresponding results is taken the simulation run is described in brief in the future chapters.