The project “Network traffic analysis a Java Project” is the system of inferring information from observing the traffic flow. This is so done because of the analysis of presence, absence, amount, direction and the frequency of traffic. The traffic flow is a sequence of packets which are sent from a particular source and sent to a particular unicast, any cast or even a multicast destination which the sources desire to label as a flow. 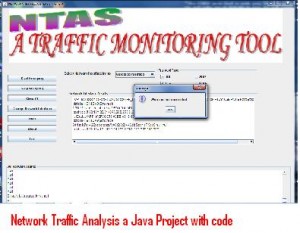 Thus a flow consists of all the packets which are present in a specific transport connection or in a media stream. The main target of this project is based n a university i.e. Uganda Christian University’s network environment where in the users of the network are about 600 users. Here in this project a prototype is developed which can analyze the traffic over the network

This project Network traffic analysis is designed for users of the network. At times there are many users that are using the network. This leads to overload condition during the peak hours. This might result in a slow network connection which makes it difficult to access the network and affect the performance parameters of the network. Earlier detection of network overload was done manually and then the network administrator would resolve the issue.

Conclusion:
The project developed here greatly reduces the problem of network overload which occurs during peak hours. This system would also show the administrators the statistics of traffic over the network and thereby prevent slow internet connections. Analysis of the traffic conditions will allow the administrator to enhance the traffic conditions.

20 Replies to “Network Traffic Analysis a Java Project with Code”