Morphological Image Processing Mini Project  is an important tool in the Digital Image processing, since that science can rigorously quantify many aspects of the geometrical structure of the way that agrees with the human intuition and perception. 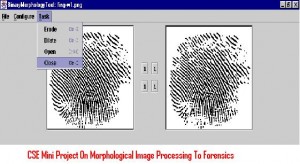 What is it based on?

Morphologic image processing technology is based on geometry. It emphasizes on studying geometry structure of image. We can find relationship between each part of image. When processing image with morphological theory.

Accordingly, we can comprehend the structural character of image in the morphological approach an image is analyzed in terms of some predetermined geometric shape known as structuring element. Morphological processing is capable of removing noise and clutter as well as the ability to edit an image based on the size and shape of the objects of interest.
Use of Morphological Image Processing:

The major objective of this paper is to reconstruct the class of such finite length Morphological Image Processing tool in a suitable mathematical structure using Java language.

The Morphological Image Processing can be further applied to a wide spectrum of problems including, Medical image analysis such as Tumor detection, measurement of size and shape of internal organs, Regurgitation, etc. Robotics: Recognition and interpretation of objects in a scene, motion control and execution through visual feedback.