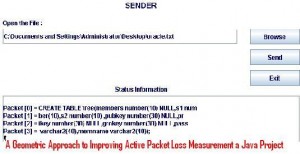 In geometric approach measuring and analyzing network traffic dynamics between end hosts has provided the foundation for the development of many different network protocols and systems. Despite of efforts on network engineers and operators to limit loss, it will probably never be eliminated due to the intrinsic dynamics and scaling properties of traffic in packet switched network.

Network operators have the ability to passively monitor nodes within their network for packet loss on routers using SNMP. In an Existing System, they analyze the usefulness of Poisson Arrivals; see time averages in the networking context. Several studies include the use of loss measurements to estimate network properties such as bottleneck buffer size and cross traffic intensity, which is not accurate. Network tomography based on using both multi cast and unicast probes has also been demonstrated to be in-effective for inferring loss rates on internal links on end-to-end paths.

What is being covered?

The project has covered almost all the requirements. Further requirements and improvements can easily be done since the coding is mainly structured or modular in nature. Changing the existing modules or adding new modules can append improvements. Further enhancements can be made to the application, so that the web site functions very attractive and useful manner than the present one. Thus, our project implements a tool named BADABING. Specifically, our method entails probe experiments that follow a geometric distribution to enable more accurate measurements than standard Poisson probing and other traditional packet loss measurement tools.