As PC’s and LAN have started being used for multiple purposes, the security of this system became an issue of concern. This led to the entry of passwords and smart cards into the market but was later attacked by hackers. As a result the password system has to be replaced by a system which offers a unique identity for users as well as authentication. Such a system is the application of biometrics which has been explained in the project. 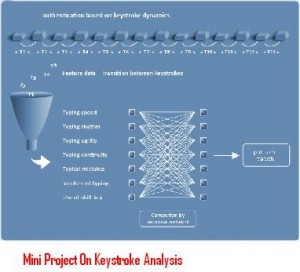 The project Keystroke analysis employs user’s identity by the way in which their way of typing in a computer keyboard. The typed key measurements from every keyboard are recorded and this is used to determine dwell time when the key is pressed and flight time which is between key transitions. This recorded keystroke data is processed for a neural algorithm that determines a primary pattern which can be compared in future.

The only hardware used is only a keyboard. This can be implemented by a password procedure implemented on the internet. The fact is that keystroke behavior is as unique as fingerprint analysis. This system cannot be used by other intruders as a person’s typing profile cannot be copied. This keystroke analysis can be used for ascertaining personal identity.

The project can be used for proper identification and authentication. The typing dynamics can be used for different user profiles. Thus this becomes a valid tool for ascertaining personal identity.