Tourism has a big role to play in today’s world. It is also a great contributor to the national revenue. However, tourists face a lot of problems when they go to a tourist destination in terms of understanding of the local language. In many places, like Europe and Germany, the signboards are in the local language which makes it difficult for tourists to understand. 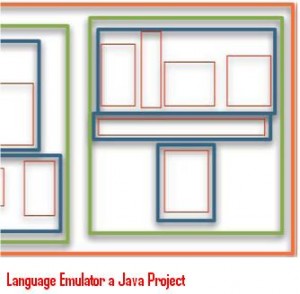 The project “Language emulator a java Project” is designed in such a way that it helps the tourist to understand what has been written on the signboards. The main device used in this project is the user’s mobile phone through which a photo is taken. This photo is sent to the server. The server executes character recognition does language translation. This translated text is then sent to the user via SMS.

The project Language emulator is mainly divided into four modules. The modules are Request acceptance, character recognition, language translation and response delivery. In the request acceptance module, a request from the customer is acknowledged. This means an image is received from the client’s mobile phone. In the character recognition module, from a given image, the characters are extracted.

In the language translation module, the extracted string is converted into the English language. Finally in the response delivery module, the text is sent back to the client’s mobile through a message. Algorithms for character segmentation, character recognition as well as future extraction have also been explained. Thus connectivity between PC server and a mobile client is established.

The main advantage of this project is that no additional tool is required to make use of this service. It can be readily used with a phone which has a built-in-camera. This project is highly useful in bus station where all the information is in hoardings and also in museums.