In cellular communication networks, the geographical area is divided into smaller regions, called cells. In each cell, there is one Mobile Service Station (MSS) as well as a number of Mobile Hosts (MH). The communication between MSSs is, in general, through wired links, while the links between an MH and MSS is wireless.

A Mobile Host can communicate with other Mobile Hosts in the system only through the Mobile Service Station in its cell. 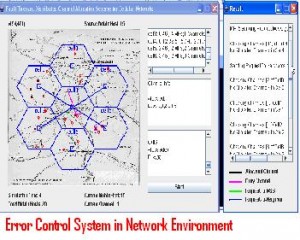 There are two kinds of channels available to an MH: communication channel and control channel. The former is used to support communication between an MH and the MSS in its cell, while the latter is set aside to be used exclusively to send control messages that are generated by the channel allocation algorithm.

In this paper, henceforth, unless specified otherwise, the term channel or wireless channel refers to a communication channel. When an MH wants to communicate with another MH, it sends a request message to the MSS in its own cell. The request can be granted only if a wireless channel can be allocated for communication between MSS and MH. Since channels are limited, they should be reused as much as possible.

The goal of the latter is to choose a channel from the computed set of channels smartly so that good channel reuse pattern can be achieved. If the MSS cannot assign a channel to support the call initiated by the MH, then we say that the call has failed.