The project “I-CONNECT ASP.Net Project” has been planned to be having the view of distributed architecture, with centralized storage of the database.

The application for the storage of the data has been planned. Using the constructs of MS-SQLServer2000 and all the user interfaces has been designed using the ASP.Net technologies. 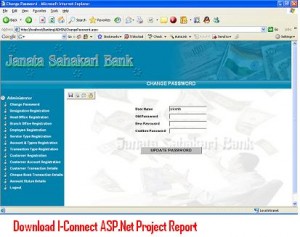 The database connectivity is planned using the “SQL Connection” methodology. The standards of security and data protective mechanism have been given a big choice for proper usage.

The application takes care of different modules and their associated reports, which are produced as per the applicable strategies and standards that are put forwarded by the administrative staff.

The “I-Connect” is an application that has been developed for a well-established regional bank operating primarily in south India.

The bank has several branches in key cities and towns in the north. In the world of this competitive environment and technological development, the bank has been totally computerized in the last 3 years, and to increase its customer base has started planning, for a concept called as e-banking; with this concept, the bank wants to move very nearer to the customers and increase its basic operational strategies.

Through I-Connect the bank wants to introduce the core concept of IT based Enabled Services (ITES). The “I-Connect” services are executed only upon the customer, and these I-Connect services would fully integrate with the core banking solution that is already in usage.

The major idea is to provide a series of services to the customer through the internet and make the customer feel flexible in calling out simple tasks faster instead of making a visit to the bank every time. The “I-Connect” service is open only to savings bank Customers and not for current account holders.

The customer is privileged to use most of the system only as a viewing phase, the only online transactions the customer can do are check book requisition and fund transfer among his personal accounts. This document contains a description for “E-Banking” enhancement.

This document will contain the functional requirements of the project and how the developers will enhance the project to achieve all the objectives. The SRS will serve as a guide for the client and the developers. The entire project has been developed keeping in view of the distributed client server computing technology, in mind. The present system is manual.

The Project Metrics has to enter all the details of project, documents, and tasks. The entire project has been developed and deployed as per the requirements stated by the user, it is found to be bug-free as per the testing standards that are implemented.

Any specification untraced errors will be concentrated in the coming versions, which are planned to be developed in near future. The system at present does not take care of the money payment methods, as the consolidated constructs need SSL standards and are critically to be initiated in the first face; the application of the credit card transactions is applied as a developmental phase in the coming days.