Using  GSM Module and Microcontroller we are designing and implementing a time saving system for daily BUS commuters, which will give the information about the present position of BUS whenever subscribed by the subscriber for a particular BUS, which will have its unique code.

Scope of the Project:

In the Bus Tracking System project, an IR transmitter is placed in bus & IR RECEIVER unit is placed at bus stop. Whenever bus reaches bus stop our unit comes to know which bus has been arrived. The transmitter present in the bus transmits a certain code using RC5 protocol. Carrier frequency for RC5 protocol is 36 kHz.

IR receiver which is present on bus-stop detects the IR signals and gives the coded data to the microcontroller for decoding purpose.  Microcontroller is controlling block of the system. After decoding this code, which bus has arrived is decided.   The acknowledgement is given to the system user through SMS. This SMS is send whenever bus is arrived.  The subscriber numbers to whom the message has to be send is stored in the EEPROM, which is the memory element used over here.

The 89s52 microcontroller communicates with EEPROM using I2C protocol. Whenever a message is to send to the subscriber for the subscribed bus controller  fetches those subscribed numbers & then send the message through GSM module. Microcontroller and GSM module are interfaced through MAX 232. . MAX232 is a device which converts TTL voltage logic levels to RS232 & vice versa.

The GSM module sends SMS to the subscriber which is mentioned in EEPROM through AT commands.  AT commands are used to send SMS from GSM module. LCD is used to display which bus has arrived. 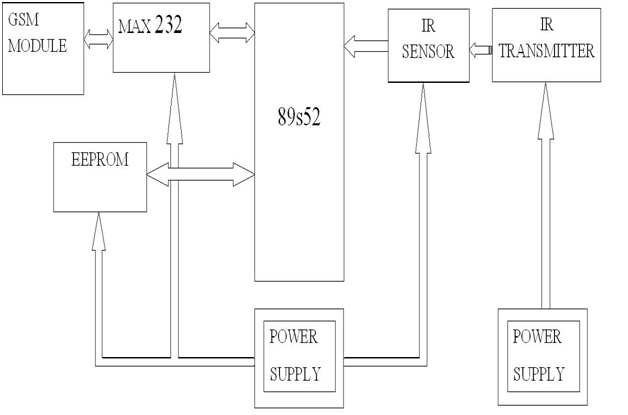