Considering the heavy traffic congestion on daily basis sometimes emergency vehicles like ambulances get stuck in the congestion which complicates the situation. Normal traffic lights are not able to operate according to the requirement of emergency vehicles. So, our project aims to make them operate keeping the track of the emergency.

We are operating the traffic light based on the interruption given by the emergency vehicle. So when it gets interrupted by an ambulance it turns off all the traffic signals apart from one on which the ambulance is coming.
Proposed- In the Smart Traffic Light Control System project IR transmitter is being used which will transmit the code and the receiver will detect it then the microcontroller(Arduino) will get an interrupt and it will stop the normal functioning of the traffic signal and free the path of the ambulance by making the light green.
CCN components to be applied-
Source encoding and Decoding and error detection like checksum and parity Checker. 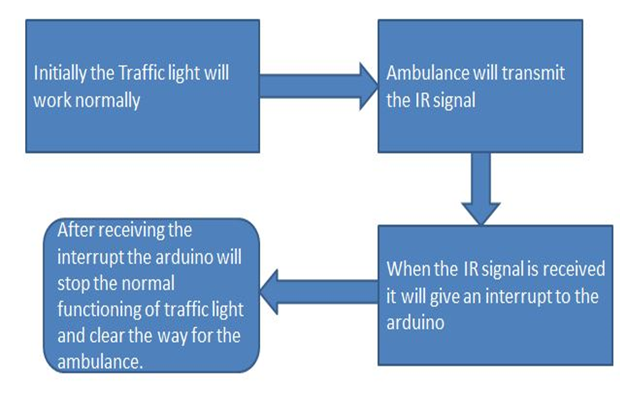 Around 250 if we use a general microcontroller instead of Arduino.

Whenever there is no emergency vehicle like an ambulance, the traffic system will work as usual but when the vehicle comes it will turn on the green light (according to the program) so the ambulance will not have to wait.
For making it full proof, source encoding and error detection are done by assigning a specific code to the ambulance.