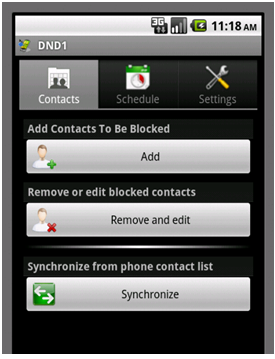 (It is a database engine open source object-oriented, its acronym is Data Broil 4 (for) Objects. It is developed to work with developments in Java and .Net. Db4o runs on any operating system that supports these languages.)

It is an application for mobile phones using the operating  system  Android  whose  function is to automatically mute  calls to contacts has previously been defined as blocked in a time  frame,  both  times  as  daily.  Once  the call  has  been ended,  Do Not Disturb leave the phone in normal mode both volume and vibration.  It also provides added functionality such as send warning messages indicating that you are sleeping (or busy).

The idea about the project is got from the requirement for not to be disturbed by a call from others at some specific time. The application is for android phone, so the development to be done using android technology. In order to block (mute) the incoming call, we have to get the number and check that whether it falls in Blocking criteria, if it is then change the Phone state to silent (if it is General) and on ending the call change state to General and send auto reply.

Since the technology used is android for this application and android uses java as base language for programs I have selected the Object Oriented System Development (OOSD) as the development strategy. Again the entities involved in this application can be considered as Objects and we can also store those Objects in the database. So I have used the Database Engine db4o.

37 Replies to “Do Not Disturb Incoming Call Manager Android Application”