The project “Project Evaluator an ASP.Net Project” has been designed to overcome the manual processes involved that goes on in a software firm. This project is a web application which can simplify tasks of the administrator, project manager, project leader, developer and tester. Throughout this system, one can decide which project has to be allocated to a client, how this project could be assigned to a leader such that he isn’t overloaded, division of projects to various developers, daily evaluation of project along with its status etc. 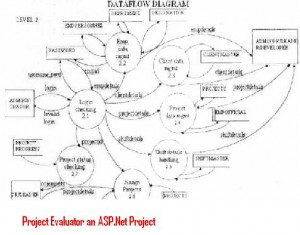 Here automatic generation of projects of reports are generated that give complete details about processes. These provide information to the user at the click of a mouse, speeding up the operations to a great extent. All the input operations in this project are in structure forms and are fully capable of checking the integrity and correctness of the input.

The project here Project Evaluator helps in the development process throughout the entire life cycle. The project has four modules-administrators, project leader, developer and tester. The administrator is the one who has control over the entire software development of the company. He is the one who takes decisions. The project leader handles the scheduling of the job to the developers. He sets a schedule and assigns a developer and monitors his progress too.

The project designed here fulfils all it objectives. It has been developed using the present scenario language Microsoft Visual C# .NET as its front-end tool, its back-end tool being Microsoft SQL server 2000. All the modules in the system have been tested and then incorporated.