Self-propagating codes popularly known as worms are drawing a lot of attention. The popular ones are Code Red, Nimda and Slammer and they are drawing attention because they cause an adverse impact on the internet. The project “Modeling and automated containment of worms a Java Project” has designed a branching process model which helps in characterizing the propagation of these internet worms. 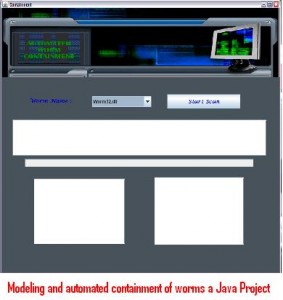 Thus in this project an accurate model for the early phase of propagation of uniform scanning worms is obtained along with an equation that helps in determining the total number of infected hosts in case of a worm epidemic. The scheme proposed here is non-intrusive in nature and can be validates by means of analysis, simulation and real traffic situations.

The project Modeling and automated containment of worms is developed for uniform scanning worms and it can be extended to preferentially scanning of worms. Here the factor which causes the spread of worms is established and hence can be stopped. The project contains automatic worm containment schemes that effectively prevent the spread of a worm beyond its early stage.

In this project, a strategy has been developed which will prevent the growth of not only fast scan worms but also the spread of slow scan worms. Here an equation is formulated on the basis of which the number of hosts that the worm infects is achieved below a designated level as established. This system can thus prevent the breeding of worms.

In the future, the project could be enhanced by developing a statistical model which would spread the awareness of the topology of worms. Consequently design mechanisms could be derived for the containment of these worms. Evaluation of the performance of real data from enterprise networks could be done. This scheme could be extended to local preference of scanning worms.

Download seminar and Project Report of CSE Modeling and automated containment of worms a Java Project.