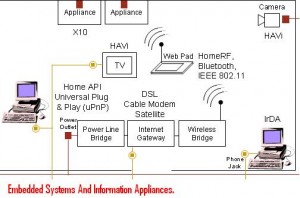 In order to implement embedded systems project programming language plays a important role,Initially students should select best high level programming language for the project and develop coding and then code is compiled in to a executable code which will be in machine language. Then it is written in to eprom’s (ROM) which is called as “microkernel”.Microprocessor uses its memory based on the bit size for 8-bit it takes less memory where as for 16 bit it takes more memory. For a simple micro controller projects there will be no priorities and operating systems  implemented . But when implementing higher level projects like 32-bit or 64-bit ,where decision making is important there should be at least a tiny operating system running to make decisions which is called as RTOS.Message Scrolling On Lcd Using Arm Controller project is a sample embedded system project for understanding micro controllers and micro processors.

Microprocessor is part of embedded system which is included as a part of system in a large system. We can consider computer as a basic example.

Embedded system is a combination of micro controller and microprocessor which is base for any large systems. As embedded system will handle entire processing information by using inbuilt programming language. Programs that are installed in system are stored in ROM/RAM, Embedded systems will provide external linking to different external interfaces using a serial and parallel port linking. I/O operations for this hardware’s are performed by system.

One Reply to “Embedded Systems and Information Appliances”