B.tech final year students who are interested in developing auction related web based application then Net Auction a web based java project will be a best choice. The main idea for developing this project is to provide an option for public for selling and buying products through auction from all over the world using a well designed web application. 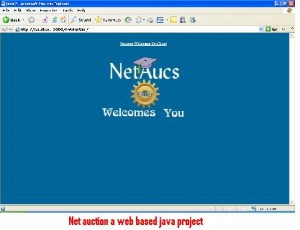 Online Net Auction a web based java application will allow users to log in to the site and specify details about auction. Through this application seller will publish his tender details to public by providing minimum biding price for the product? Then buyers from all over the world who are interested in the product will bid for the product which will start from the minimum rate provided by seller. Auction will be closed based on the buyers best bid provided in auction. This project includes new option like automatic bidding where buyer can set min and maximum bidding amount after the maximum biding is reached user will be informed through sms. This application has sms feature where messages will be sent to seller and buyer about the status of product.

Buyer Module: In this module bidder should log in to his account and select products he want to bid for, using two features normal bidding or automatic bidding.

Seller Module: This module is for user who wants to sell his product. In this module seller should upload information of the product he want to sell with details about the product and minimum bidding cost.

Admin Module: In this module admin will coordinate with seller and buyer on the auction and maintain reports.

For more information on this net auction cse projectyou can download project report from this site.

The CIVIL Project Report On Panama Canal Construction report gives brief explanation of Panama Canal Construction. This is one of the largest and most difficult engineering projects. The channel is not only a “way” of water between the two oceans. There are a series of 6 locks in two parallel tracks, lift and lower ships between the Caribbean and the Pacific Ocean. The Panama Canal is a man-made canal which joins the Atlantic Ocean and the Pacific Ocean. The first attempt to construct the Panama Canal began in 1880 under French leadership. This attempt was failed and saw 21,900 workers died. Then the project of building a canal was attempted and completed by the US in the early 1900’s.

The Panama Canal is a vital resource for the international trade and is an important link between two oceans of the world. However, its future is in doubt due to massive deforestation. Despite environmental laws enacted to protect the watersheds, Panama lacks the resources to ensure their safety. By the time the canal was completed, a total of 27,500 workmen are estimated to have died in the French and American efforts. The reasons behind the French failing to complete the project were due to the diseases carrying mosquitoes and the yellow fever and the inadequacy of their machinery. An excess of 1.53 million cubic metres of concrete was used in the construction of the Gatun locks alone.

The canal was completed in 1913 by the United States, after France failed twice to get it built. This is another legacy in today’s world, the glorious 19th Century engineers. This hard work of the engineers who did not loss hopes and tried to Construction Panama Canal and now the whole world says that Civil Engineers made the IMPOSSIBLE to possible.

The report provides the details about construction back ground of India and economic growth of India. Today, India is the second fastest growing economy in the world. The Indian construction industry is an integral part of the economy and a conduit for a substantial part of its development investment, is poised for growth on account of industrialization, urbanization, economic development and people’s rising expectations for improved quality of living. In India, construction is the second largest economic activity after agriculture.

In conclusion we can say that, a unique feature of the transition of the Indian economy has been high growth with stability. The Indian economy has witnessed considerable progress in the past few decades. Most of the infrastructure development sectors moved forward, but not to the required extent of increasing growth rate up to the tune of 8 to 10 per cent. The Union Government has underlined the requirements of the construction industry

Impact Of Rice Husk Ash On Cement Concrete Project Abstract is a lab report on CEMENT CONCRETE which IMPACT OF RICE HUSK ASH. HUSK ASH (HA), after the burning of rice husks (RH) has manufactured a high pozzolanic reactivity and property. Indian Standard code of practice for reinforced concrete and plain is 456- 2000, recommends use of  Rice Husk Ash in concrete but does not specify measures. Chemical composition of  Rice Husk Ash is affected in the combustion and the temperature. The report explains about the complete picture of the lab report with percentage value.

This report provides the complete picture and experimental methods of RICE HUSK ASH ON CEMENT CONCRETE production. It also explain the destructive test details. Compressive strength of concrete samples showed maximum increase 3.08% between RHA 7.50% to 10.00% which decreased further for higher percentage of RHA.

Reduction in water absorption, from results obtained from 6 tests concrete and 3 tests on mortar samples, it is observed that up to 10% RHA with concrete and mortar enhances all properties and it is observed that 12.5% of Rice Husk Ash by mass of cement as the optimum doses to be added in concrete production of M20 particularly when the husk is burnt under field condition to utilize the easily available and low cost resources for betterment of concrete structure with respect to economy, durability and strength. So best applicable percentage of rice husk ash as per field condition 10.00% for optimal strength and durability.

This Highway Network System Civil Project Report is about Highway Network System to show the details of the road Network System. A road is a public road, especially a main road that connects two or more destinations. All interconnected series of streets may be different, like a “highway system”, a “road network” or a so-called “system of road transport.” The history of street art gives us an idea about the way the old days. Streets of Rome were built on a grand scale, and can radiate in many directions, to support military operations. Therefore they are considered pioneers in the construction of roads.

With the advancement of better roads and efficient control, more and more investments were made in the road sector especially after the World wars. These were large projects requiring large investment. For optimal utilization of funds, one should know the travel pattern and travel behaviour. This has led to the emergence of transportation planning and demand management. To improve the road control Modern Soil Stabilization Techniques has been used. This will help to construct the road in a better way.

Traditionally highways were used by people on foot or on horses. Later they also accommodated carriages, bicycles and eventually motor cars, facilitated by advancements in road construction. In the 1920s and 1930s many nations began investing heavily in progressively more modern highway systems to spur commerce and bolster national defence.

The new trends are initiative in the highway improvements. Now highways are well stabilized and more secure. The costs in the construction as well as in maintenance are reduced. These new trends are eco friendly because the use of fly ash is used as an important material and it is a residual of thermal power stations and in Free State, it is very harmful for the environment. So there is a great hope for the further improvement in these techniques.