This Btech Chemical Project Report On AMMONIAM Plant is about the Ammonia Plant Chemical Project report. The project starts with Introduction and continued with the explaining about Names of Ammonia and Ammonia Production. In addition, the report consists of properties of Ammonia which contains Structural, Physical, Chemical, Thermodynamic, and Hazardous of Properties.

Ammonia is the important basic chemical of the world, marking with materials such as sulfuric acid and sodium carbonate. In the fertilizer field, anhydrous ammonia itself has become the major supplier of the fertilizer nitrogen in India and it is also important inter mediate in production of more complex chemicals. Ammonia is applied straight to the soil from tanks containing the liquefied gas. It is a very wrathful source of nitrogen that is important for plant growth. The report also defines the uses of Ammonia.

The main function of ammonia is to supply nitrogen in a comparative form. Ammonia is unique in that, unlike the other basic chemicals, the main constituents, nitrogen is readily available without need for transport and in unlimited quantity.

The history of ammonia production cannot be separated very well from the larger subject of nitrogen supply to the fertilizer and chemical industries there was no synthetic ammonium, dependence was placed unnatural and waste product of various kinds. The methods contains of various kind of process which help for AMMONIUM PRODUCTION. This project report also provides the brief description of LINDE Ammonia concept (LAC).

In this project report an attempt is made to provide an complete description of AMMONIAM Plant and production of ammonia has been found to be more economical than either fixation by plants or production other nitrogen compounds. Ammonia is also used in the construction of certain dyes and applied in the dyeing and scouring of cotton, wool and silk.

This Chemical Project Report On Production Of Ammonia report is about the Production of Ammonia which is produced by Department Of Chemical Engineering. The content of the report are Desulfurization, Partial Oxidation of Hydrocarbons, Carbon Monoxide Shift Conversion, Gas Purification, and Ammonia Synthesis.

The report also contains the flow diagrams of ammonia production and complete details about Manufacturing Process. Today ammonia is the second largest synthetic chemical product; more than 90 % of world consumption is manufactured from the elements nitrogen and hydrogen in a catalytic process originally developed by FRITZ HABER and CARL BOSCH using a promoted iron catalyst discovered by ALWIN MITTASCH.

Ammonia is a combine of nitrogen and hydrogen with the formula NH3. It is a colorless gas with a characteristic pungent odor. Ammonia contributes significantly to the nutritional needs of terrestrial organisms by serving as a precursor to food and fertilizers. Ammonia, either directly or indirectly, is also a building block for the synthesis of many pharmaceuticals. Although in wide use, ammonia is both caustic and hazardous. In 2006, worldwide production was estimated at 146.5 million tones. It is used in commercial cleaning products.

Ammonia, as used commercially, is often called anhydrous ammonia. This term emphasizes the absence of water in the material. Because of its many uses, ammonia is one of the most highly produced inorganic chemicals. Dozens of chemical plants worldwide produce ammonia. The development of the synthesis of ammonia from its elements is a landmark in the history of industrial chemistry.

For the major part, ammonia production in the next 15 to 20 years will rely on the classic ammonia synthesis reaction combining nitrogen and hydrogen using a catalyst at elevated temperature and pressure in a recycle process. Thus further progress may be confined to minor improvements of individual process steps, catalysts and equipment design. Most new technology developments will mainly reduce investment costs and increase operational reliability.

Computer science students who are interested in developing government related projects then developing .Net project on Citizen Card system project will be one of the best options for you. This type of applications is upcoming projects in India. As this project is gaining interest in India now days, citizen card system project will provide scope for students to prove their knowledge. 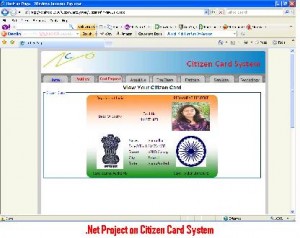 Citizen card system projects main idea is to provide a identity card for every Indian with different identification number this card is designed in the way that it is easy to carry. This type of project is upcoming in our country but this project had already successful in countries like U.S.A …Etc. citizen card system is compulsory in some circumstances mainly for increasing security for a county.

Citizen card system will not compulsory but if this project is implemented it can make life much comfortable. Using this system there will be no need to carry driving license, passport …etc, identification related documents where ever you need them. Identification card will provide entire information about your documents.

This application will maintain data of every citizen starting from documents issued by the government to fraud details. Anyone can know your information before they can work with you. This procedure will increase security for every individual in a country.

5) Maintain the history of every person.

For more information on Citizen System project you can download project report from this site.

A need for the development of better drainage system has always been a subject of discourse. The DESIGN OF ROAD SIDE DRAINAGE CIVIL Engineering Project provides information on easy and result-oriented ways for construction of road fences and the most budget-oriented road side design with proper drainage system(s). The project stresses the importance of implementation of the strategies or the techniques for proper construction of the drainage system(s) with respective to concerns of the users or the habitants.

Improper drainage in any form as surface or subsurface or cross drainage can create a great difficulty for the habitants. To a larger extent, poor drainage system can affect the structural integrity and sanitation facilities which the users or the habitants are used to. If the roads are properly designed then only the related problems such as pumping or accumulation of mud in diurnally busy areas or Hydroplaning etc can truly be rooted out and which if neglected can continue to create havoc for the users. If there can be created any efficient way for easy removal or elimination of water then this may provide myriad benefits to the users.

This project also shed light on types of road-side drainage which is based on the structure of the constructional properties of the roads. It also speaks of the importance of effective and reliably implemented techniques for easy execution of the road side drainage system(s). Hydrological and Hydraulic analysis for perfect elimination of the flaws in executing the designing strategies of the surface drainage is also very clearly presented.

The project provides a better and an efficient way to judge the lay out proposals for road side drainage and thus will also fulfill all requirements of an ideal drainage system. The problems such as the presence of potholes, development of water-logging conditions, or problems related to erosion or corrugation should not be overlooked when designing road-side drainage.

This energy can be harvested by wind turbines. A Wind from the Sun power plant would simulate this same type of system that occurs in nature, but with a greater degree of control and certainty. This will result in a more reliable wind with a higher average wind speed.

In conclusion we can say that, this type of system produces some power. The sun warms the collector, which heats the air. The higher the air temperature, the air expands, causing the air pressure. Air must be from high to low pressure through the air duct and past the wind mills on the production of energy to move. A sea breeze works much the same way and produce significant winds. Alternate Design of the report is to increase efficiency, place air channel so that one end is over a large body of water. The water will be much cooler than the collector and will increase the air pressure difference along the air channel.